Back to Parks and Recreation 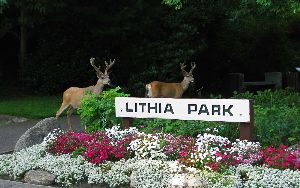 Wildlife is one of the values of living in a beautiful natural environment such as Ashland. But, as human populations expand into formerly wild areas, conflicts between people and animals inevitably increase.  It is happening nationally and it is happening here. Several years ago, City Councilors assembled a small group of people: biologists, and persons living on the urban/wildlife interface, for the purpose of finding ways of sharing with the public, facts about the nature of the urban wildlife issue, and finding ways to understand and address the problems. The committee has been fortunate to have some effective partners in this effort: Mayor Stromberg, management and staff of Recology, Southern Oregon University, APRC and citizen volunteers.

Both urban and rural areas across the country have been facing our same situation for decades. We can learn much from them, but coexistence is the key, because the issue is not going away. Having an informed populace is a first step, and along with education about our fellow creatures, we also hoped to provide practical solutions.

The areas of local concern are Ashland’s deer, bear, and occasional cougar. At some point we would like to focus on smaller animals like skunk, foxes and others, but for now, it’s the big three.

Bears are the raiders of garbage cans and can be destructive. In years past, Recology responded to the committee’s request and made bear proof cans available to their customers. They sold out immediately and have reordered. APRC has also placed them in their jurisdictions. This was a real and effective practical outcome.

Ashland’s deer population has been a growing concern to many, both for public safety and the safety of the animals. Several years ago, Mayor Stromberg held a community forum to discuss the issue. From the various conflicting voices and opinions it became clear that, in order to really understand the problem, we had to know what we were dealing with, and establish some basic facts: Is the deer population increasing or decreasing? What is the distribution of deer among Ashland’s neighborhoods?

These and other questions can begin to be addressed if we better understand how deer populations change over time. We hope that can be determined by conducting repeated, systematic, censuses of the population. Therefore, our objectives in conducting this first deer count are to (1) determine if it is possible to gather meaningful information about the deer population in Ashland using citizen volunteers and (2) begin the process of developing a long-term database on trends in the deer population. It is not to support any preconceived conclusions.

The first deer census took place on the morning of Thursday, October 13, 2011 and was repeated in the spring of 2012. If successful, counts in future years will establish a baseline for understanding trends. The City has been divided into eight major areas with deer populations as provided by Recology staff observations. Teams of citizen observers will simultaneously count individuals within a given amount of time to prevent duplication. View a map of the census areas.

Watch this site for ongoing additional information on counts, visiting speakers, films, and other events to keep ourselves informed about living in the urban/wildlife interface.

For starters, here are some simple guidelines to lessen conflicts and protect your property:

Do not feed wildlife. Do not approach

Protect Yards and Gardens by

Do not leave pet food or feeding dishes outside

Put bird feeders out of reach

Cover compost or use container composting

Additional information can be found at other websites. Here are several links: