Alert: Jackson County is off the Governor's watch list, but still in Phase 2 of reopening. Please continue to wear your face masks in indoor and outdoor public spaces. Get more updates, cancelations, and resources related to the Coronavirus (COVID-19) here.

Back to Parks and Recreation 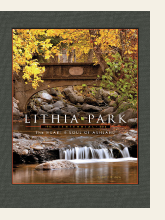 2014, Lithia Park was designated as one of the top ten Great American Spaces by the American Planning Association. All dogs, except for ADA compliant service dogs, are not allowed in Lithia Park and dog owners risk being fined $115. Dog owners may walk their dog on a leash around the park.