Beginning the morning of Monday, May 21st and continuing through Thursday, May 24th, the Wastewater Collections Division of the Public Works Department will be conducting ‘smoke testing’ in the neighborhoods between Clay St. and Tolman Creek Rd. and between East Main St. and Siskiyou Boulevard. Smoke testing is a tool used to indicate potential problems within the sanitary sewer system including inflow ...of rain water and infiltration of ground water. Storm water and ground water entering the sewer system can overwhelm the system and will increase the volume of water treated at the Wastewater Treatment Plant. Correcting the inflow and infiltration (I & I) issues will ensure our treatment plant has adequate capacity to treat Ashland’s actual wastewater needs well into the future and will reduce operating costs overall.

This smoke testing uses a nontoxic ‘smoke’ similar to the fog that would be used in a theatrical production and will cause no adverse effects to humans or pets. During testing it is possible this smoke will enter your home, if it does, that’s an indication that sewer gas is also entering your home. The smoke product used during this testing is nontoxic. Sewer gas can be a health hazard so if you do get smoke inside your home, you will want to correct the situation right away. Plumbing issues can be as simple as a ‘P’ trap (the u-shaped pipe underneath the drains in your sink or shower) that has dried out from lack of water use. If you have a fixture in your home that has not had water in it recently, it is a good idea to run some water, just 20 seconds will do it, to fill the ‘P’ trap. Water in the ‘P’ trap provides a barrier that prevents sewer gas from escaping from the sewer system into your home.

It is possible that our smoke testing could reveal a plumbing issue on private property that will have to be corrected. That correction will be the responsibility of the property owner. In some cases we’ve found that sump pumps or down spouts have been plumbed into the sewer system, we’ve also found the lateral pipe, or the pipe that goes between your house and the sewer main in the street can also have issues. If this is found during our testing you will be notified in a letter in the days following our testing.

Notices were mailed out to those within the smoke testing area early this week notifying residents of this testing (see picture of testing area). If you are within the testing area and there are any individuals in the home or business who have respiratory problems or are immobile, please notify us at 541-488-5587 as early as possible prior to the scheduled testing.

More information regarding what Inflow and Infiltration is and what to expect can be found in the May edition of the City Source https://www.ashland.or.us/…/City%20Sou…/May2018_WebLinks.pdf 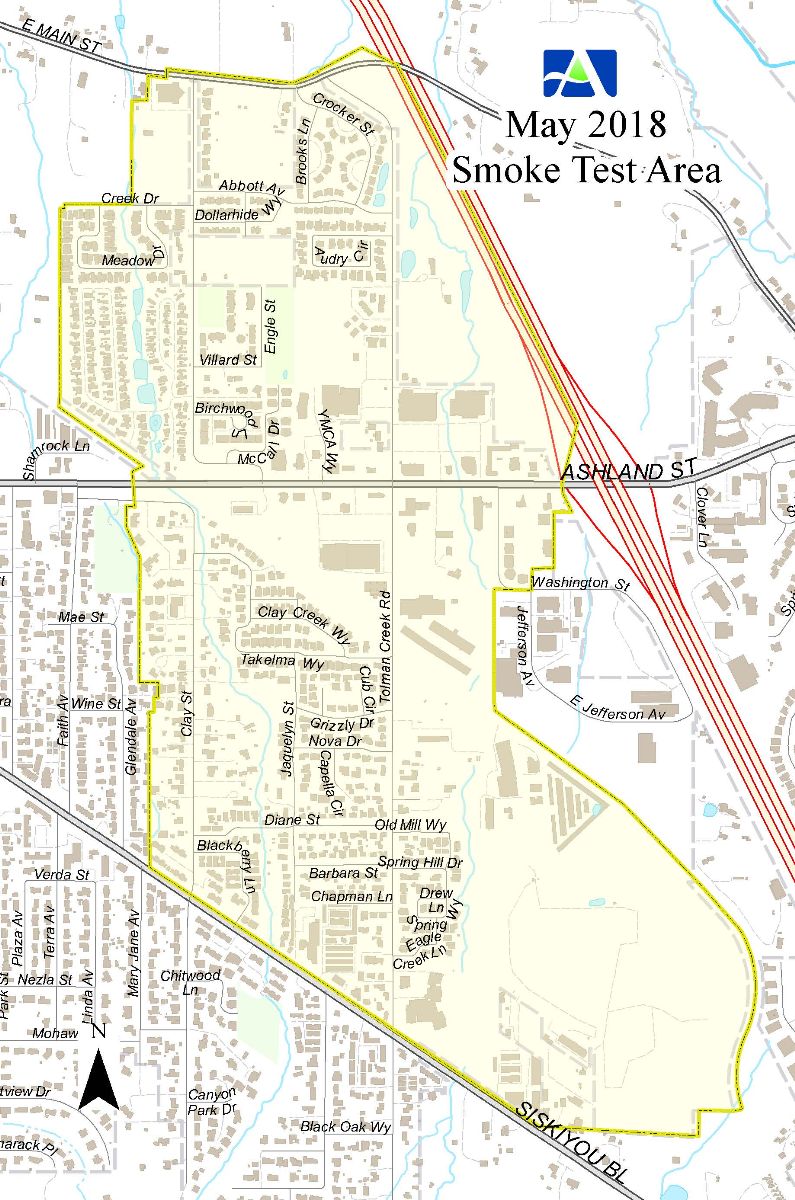