December 15, 2020
The City Administrator’s Report showcases current events facing the City externally and internally since the last Council meeting, while highlighting City accomplishments.
City of Talent Police Department Enhanced Partnership Discussion
Ashland Police Chief O'Meara and I met last week with with the City of Talent City Manager and Talent Police Chief to explore the idea of Ashland potentially providing higher level of police services in a more formal structure than our current assistance through longstanding mutual aid agreements and more recent assstance in the aftermath of the Almeda fire.

The Talent City Council will be determining whether they would like to formally create a letter of intent to guide these discussions.  If approved, Chief O'Meara and I will bring this formally to the Council for consideration and direction.


Evacuation Study Update
KLD Engineering is performing an evacuation study for the City.  Below shows the current progress made on the study with the project completion date in the Spring of 2021.

The Ashland Chamber of Commerce was able to secure grant funding from Business Oregon to create a website for Ashland retailers to list their products online. The site ShopAshlandOregon.com gives local businesses a free online presence and allows customers to shop multiple stores in one spot online. The website has been live since the beginning of November and has been continued to add more products from retailers since then. The website allows for the community and visitors to shop locally while staying safe.

Community Center & Pioneer Hall Rehabilitation
On October 8, 2020, Public Works released a Request for Proposals (RFP) for the rehabilitation of Pioneer Hall and the Community Center.  The RFP was posted on ORPIN, where it was accessible to any and all firms with an interest in competing for public projects.  The RFP specified a Qualifications-Based Selection (QBS) process, which facilitates selection of the most qualified candidate, rather than the lowest cost proposer.

On the proposal submittal date, November 10, Public Works received five (5) responsive proposals.  Proposals were distributed for independent evaluation to a four-person review team, including Scott Fleury (Director of Public Works), Michael Black (Director of Parks), Kaylea Kathol (Senior Project Manager), and Dale Shostrom, Chair of the Historic Commission.   The evaluation team completed QBS scoring on December 2, and all evaluators consistently scored ORW Architecture and Marquess & Associates as the top two proposers.  Both firms submitted excellent proposals, and each had various merits that precluded an easy decision of award.  Accordingly, the team determined that both firms should be interviewed in order to inform the award decision.

A letter of Notification of Intent to Interview, as well as scoring results, were sent to all proposers on December 9.  The evaluation team is tentatively planning interviews for the first week of January and is in the process of developing interview questions. Once the final selection is made staff will begin negotiating the scope of services and commensurate fee. Staff expects to bring the contract award before Council in February of 2021.
Croman Mill District (CMD) Plan – Update

The Croman Mill District (CMD) Plan was adopted in August 2010. The Plan was incorporated into Ashland’s Comprehensive Plan and a new chapter was added to the City’s Land Use Ordinance to guide Plan implementation. Key objectives reviewed during the creation of the Croman Mill District Plan and implementing standards included preservation of industrial and office use lands, buffering the neighborhood to the west, mitigating traffic impacts to Tolman Creek Road, the preservation of natural areas (creeks, pond, and wetlands), addition of a central open space element, providing a street network incorporating truck, transit, pedestrian and bicycle access and creating a unique identity to improve visibility of area.

Clean-Up Status
The former mill site consists of approximately 70-acres and was home to planning and sawmill operations for 62 years, from 1934 – 1996. At the time that mill operations were abandoned, the property contained an abundance of decommissioned equipment, construction material and piles of debris and organic material. The property owners began preparing the site for development by clearing the equipment, material and buildings after the Croman Mill District was adopted by the City in 2010.

In 2012, the property owners began a reclamation process to remove layers of organic material from the northwest corner of the site in the former log deck area. By 2020, reclamation of the log deck area has been mostly completed, however, the need for extensive reclamation of a significant portion of the site is still necessary.  Over the past eight years of reclamation activity, excavated and screened materials were used to produce a quality soil amendment. The property owner has indicated that sales from the soil amendment assisted in financing the ongoing clean-up of the site, which has been dramatically more widespread and involved from what had been initially anticipated.

Denial of Land Use Application – Soil Amendment Manufacturing
In August 2020, the Community Development Director denied a request for a conditional use permit for a 5-year extension to complete site reclamation and cleanup of the former mill site. The proposal would have entailed the continuation of a recycling activity which involved blending organic material (wood waste) with clean fill and hauling the material to farms and other end users. The process also included the import of “clean fill”, to mix it with organic waste material.  The decision determined that the request exceeded the requirements of a temporary use as well as was inconsistent with the zoning district’s standards for manufacturing uses.

Revisions to the CMD Plan – Memorandum of Understanding
In March 2019, the City Council approved a memorandum of understanding (MOU) and scope of work to evaluate potential revisions to the CMD Plan, specifically analyzing changes in zoning that would allow the development of more housing in the plan area. Under the MOU, City staff and the owners of the Croman Mill site would work collaboratively in studying potential Plan revisions. The MOU identifies work expectations of both the City and Croman Corporation. The property owner had maintained that the development of additional housing units would facilitate and finance the construction of the main street and necessary utilities (e.g., water, sewer, storm drain and electric), serving to potentially jumpstart the development of the larger Croman Mill District area. Since some initial meetings between the property owner’s agent and staff in later 2019, there has not been any follow-up action by the property owner and the analysis of zoning revisions has currently stalled. The property owner has expressed interest in resuming the actions identified in the MOU in the future, but at this time the unforeseen passing of co-owner Bud Kaufmann and the magnitude of remaining site reclamation has necessitated the current pause.

Current Status - Phased Disposal of Waste Debris Piles
With the denial of the land use application, the continued manufacturing of soil amendments is not permitted at this time. A “stop work” order has been placed on the property that restricts continuation of site excavation until a grading/excavation permit has been issued by the Ashland Building Division. Staff has been in correspondence with the property owner and their consultant CEC Engineering about the requirements of the grading permit and it is anticipated that plans will be submitted for review within the next 30 – 60 days. The City has authorized the removal of several, existing large piles of waste debris. Waste debris removal was scheduled to commence in late November 2020, but trucks identified to perform the work have, for the time being, been contracted by FEMA to assist in clean up efforts associated with area wildfires. The map below identifies the initial phases of debris removal. 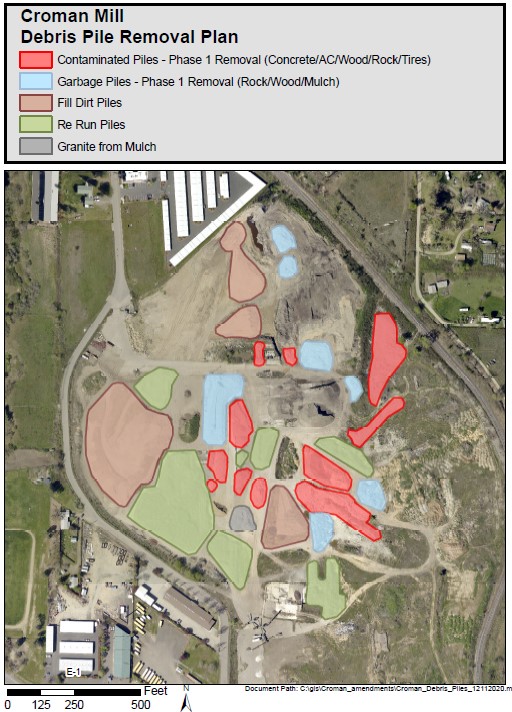