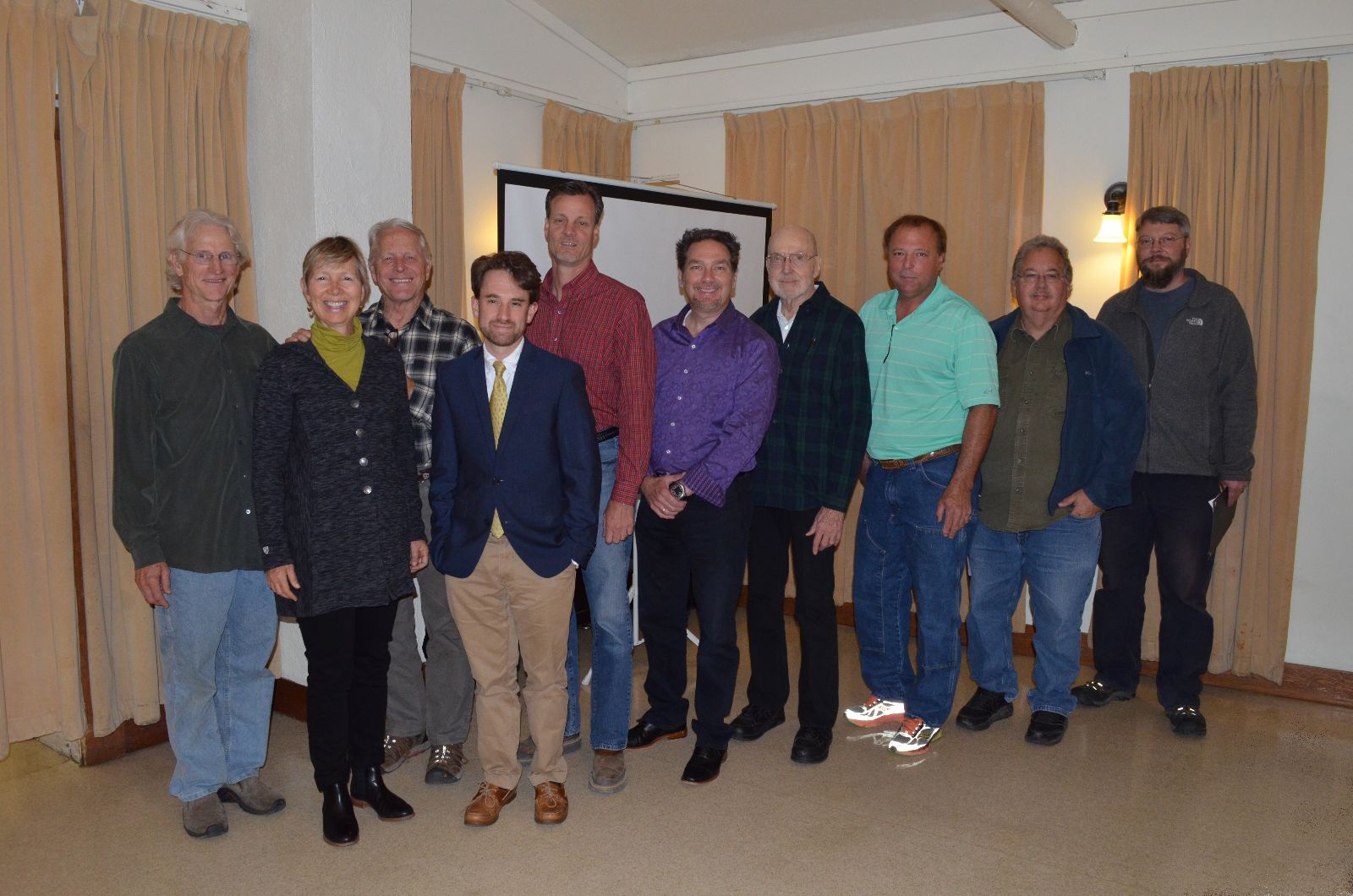 The building was built in 1925 as a parking garage and has been used in the past as a bowling alley and roller rink and, in the 1970s, was an art school, before being taken over in the early 1980s by OSF as its production and scene facility.  OSF did a substantial remodel in the 1980s when it bought the building, installing a gabled roof and steel supports.
OSF recently undertook a $4 million remodel of Oregon Shakespeare Festival’s big scene shop on First Street which was completed in October. It has been repurposed as the Hay-Patton Rehearsal Hall.  The renovation includes new roof, interior partitions, all new windows, and lots of new steel to support the roof.  The building has been named for OSF Senior Scene Designer Richard Hay, who has designed 243 productions in 58 seasons with the Festival, and Executive Director Bill Patton, who served OSF for over  48 years, beginning in 1948.
The renovation of this building is worthy of an award for the following reasons:
The Hay-Patton Rehearsal Center is tastefully remodeled in keeping with its historic past.

The site at 270 North First St. is located in the Railroad Addition Historic District across the street from the Ashland Food Co-op.  In the late 1940’s a small wood-framed shingled cottage was built on the lot by Frank Hall who quickly sold to Mary Thompson in 1950.  While in poor condition, the simply designed house retained sufficient integrity to relate its development during the secondary period of significance in the history of the Railroad District.
Rick and Nisha Jackson bought the house with the intent to demolish it and build a new contemporary replacement home for an investment rental property and future second home.  The Historic Commission balked at both ideas initially, but upon inspection, the demolition was clearly warranted after years of neglected maintenance and structural deficiencies.  Fred Barnum, the general contractor for the project, was astonished with the inadequacies of the dilapidated building while tearing it apart for its removal.
The initial new house proposal was for an ultra-contemporary two story building that included an accessible landscaped flat roof, phenolic resin panel siding, and windows without trim.  This plan was met with much opposition from the Historic Commission members, Planning staff and concerned neighbors.
The Jacksons’ and their designer, John Turman, were more than willing to accommodate and respond to the various concerns.  The creative changes included more traditional elements such as a gable roof and an emphasis on historic horizontal and vertical rhythms for window placement, trim details and lapped siding.  The design elements and quality materials were expertly assembled by Fred Barnum and his craftsman.  The rich exteriors color pallet also fits well into the historic neighborhood setting and the energy efficient and sustainable building approach is commendable.
Rick and Nisha Jackson have created a beautifully designed and finished residence in the Railroad Historic District. This project also exemplifies how meeting the challenges of the Ashland planning process can be successful for all, with a compromising approach.

The Central Oregon & Pacific Railroad has refurbished and re-opened the Siskiyou Line which was taken out of service in 2008. This was once part of the mainline originally owned and operated by Southern Pacific Railroad. Rail service over this line through the Siskiyou Pass officially began when Charles Crocker of San Francisco drove the Golden Spike on December 17, 1887 at 5:04 PM at the East end of the Ashland yard. This joined the rails from the North which entered Ashland in 1884. A Golden Spike memorial plaque is planned in the Railroad Park adjacent to this historic Last Spike event.

The Central Oregon & Pacific Railroad is keeping this important and historic railroad line active and maintained with daily rail service through Ashland from Northern California and to locations northward. It’s reassuring to many once again to hear the sound of the trains going through town. We wish The Central Oregon & Pacific Railroad all the best.

It is with great honor that we present the Award for Excellence to the Central Oregon & Pacific Railroad.

The first permanent Catholic Church in Ashland was built in 1889 by contractor C.W. Ayres and dedicated on September 18, 1890 as Our Lady of the Most Holy Rosary Catholic Church. It provided its congregation a spiritual home thru 1959 when they relocated to their new Lady of the Mountain Church on the south end of town. There after the church building was the home of the Full Gospel Pentecostal Church of God from 1963 thru 2012.
After years of slow deterioration, Cory Ross and Greg Conaway purchased the old church property in 2013 and proceeded to resurrect the ageing church back to its original grace and beauty. They assembled a team of some of the areas most skilled and talented subcontractors, craftsmen, artisans and volunteering friends to provide the heavy lifting on this complex project. Dragonfly and On Point Construction were instrumental in building the addition with great skill and ability. Historic Commissioners, Renwick and Shostrom assisted with help on important design questions at critical phases of the project.
To transform the church building into their vision of a beautiful open floor plan living space, required clearing the back of the property of the dilapidated 1975 era education building so that they could then build the master bedroom addition at the back of the original church building. This new addition blends seamlessly with the original volume in design, detail and quality as if C.W. Ayres had been on site overseeing each step of the construction, saw and hammer in hand.
But!...As anyone knows that has watched the transformation of this important and historic church, the quality addition was probably the easy part of the renovation. Incredible efforts were made to rebuild the entire foundation under the original structure and install significant seismic upgrades that were not required. Ben Trieger rebuilt and restored all the original windows, making them functional, including the huge and beautiful arch head windows that provide such a significant and classic architectural feature.
To top it all off, literally, special and loving attention was invested in the restoration of the severely compromised steeple to its original appearance based on historic photos. Including sourcing and installing a bell from the original foundry. The original bell was moved to Our Lady of the Mountain Catholic Church when the congregation moved there in 1959.
Though the use of this beautiful building has changed, the original catholic congregation from 1900 would expect, on viewing it today, to enter for Sunday services with no knowledge of its metamorphosis in the past 127 years.
It is for these reasons that the City of Ashland Historic Commission Award for Historically Compatible Addition was unanimously voted to Cory Ross and Greg Conaway for their vision and effort expended to save this beautiful and significant historic church, raising the bar by example for all who own property in or near our Historic Districts.

The Chautauqua movement began in 1874 with the founding in upstate New York of the Chautauqua Institute.  Its mission was to stimulate spiritual growth, educational study and intellectual growth in an outdoor setting.
The success of this project in New York led to communities across the country adopting this concept to provide cultural opportunities on a local basis.  By 1893 when Ashland assembled its first summer program there were over 50 similar assemblies across the country.
The movement began to lose favor during the 1920’s.   The Great Depression brought to an end the regional Chautauqua assemblies, leaving only the Institute at Chautauqua Lake in New York, which continues to this day.
With rapid growth in participation, the Ashland dome was expanded both in 1905 and 1917.  The concrete walls enclosing the Elizabethan Theatre are all that remains of the structure, but the Chautauqua Walkway from the plaza to the site continues to serve as a primary entrance to the Oregon Shakespeare Festival.
This project was undertaken to improve public safety and update utilities associated with the walkway.  It was important to maintain the historic character and ambiance of the site while doing so. The best approach proved to be a complete restoration of the Walkway. A sample of original paving was used to match the historic color of the new paving. The carved stone lettering was reinstalled in the original location. Landscaping was only minimally altered during the project.
City of Ashland Public Works Division undertook the project together with Ron Hobson of Ashland Construction and Ashland Electric Department and fully met this requirement.  The preservation of the original stone paving identifying the walkway is a symbol of this commitment and respectful attitude of those engaged in this work.  With the completion of this work, future generations will be exposed to the Chautauqua experience by the presence of the Oregon Shakespeare Festival.

Richard Hay is in his 60th season at the Oregon Shakespeare Festival.  During that time he has done more than anyone to influence the architecture and construction of the Festival’s three theatres: the Elizabethan Theatre including the Allen Pavilion, the Angus Bowmer Theatre and the Thomas Theatre.   He worked with the architects and consultants from the time these projects were just a concept until they opened their doors to their first audience, designing all the performance spaces himself.
Richard has not only made a significant contribution to the architecture of Historic Downtown Ashland, but he has been a community leader who has supported many organizations and causes helping make Ashland the wonderful community it is!  Thank you, Richard, for all you’ve done for the Oregon Shakespeare Festival and your community!