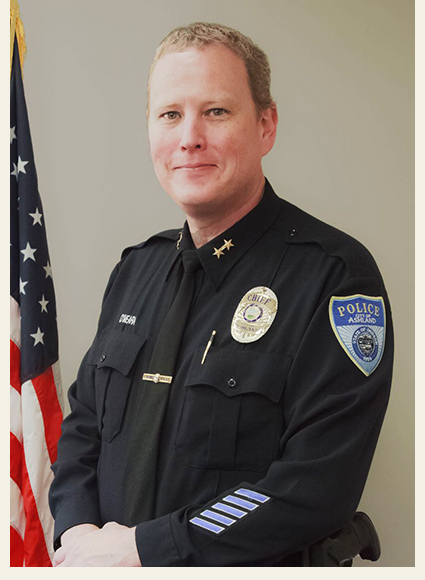 Waldorf School and Detroit Public Schools. Chief O’Meara graduated from Hillsdale College with a BA in Psychology and went on later to obtain a Master’s Degree in Management from Southern Oregon University. Chief O’Meara worked for several smaller agencies in Hillsdale County before returning to Detroit to join the Wayne State University Police Department.  He worked for the WSU Police for 13 years, serving as a field training officer and instructing in several areas of law enforcement. He was promoted to Sergeant, then Lieutenant, before leaving the WSU police department to join the Ashland Police Department in January of 2010.

Since joining the Ashland Police Department, Chief O’Meara has served as a Patrol Sergeant, Detective Sergeant and as the Deputy Chief over both the operations and support divisions of the department. He has attended several advanced police schools including the International Association of Chiefs of Police Leadership in Police Organizations School, the Oregon Executive Development Institute’s leadership school, and most recently the Senior Management Institute for Police held at Boston University.

Chief O’Meara believes strongly in community engagement, and looks forward to continuing to build on the good relationships that the police department has with the community. Feel free to contact Chief O’Meara at tighe.omeara@ashland.or.us