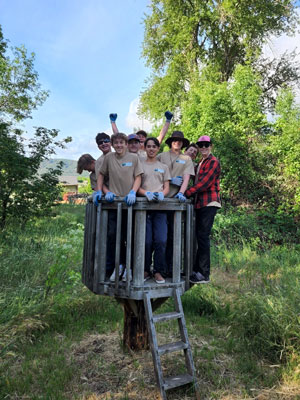 across the Rogue Valley as part of the annual Youth Conservation Corps Program. The program is open to students grades 8-12 to earn academic community service hours and give back to their community. This year the volunteers contributed 500 total volunteer hours to Lithia and North Mountain Park.

For two weeks, the crews laid new woodchips on trails and removed invasive plants from natural areas throughout Ashland’s two keystone parks. They managed to restore an entire mile of trail and eradicate Himalayan blackberry from six areas of the parks. Periodically ‘chipping’ trails is essential park maintenance for keeping park patrons on the paths, out of fragile habitats, as well as keeping trails passable in wet weather. Invasive plant species removal serves two purposes: to encourage native plant growth supporting wildlife and biodiversity, as well as decrease wildfire risk. Additionally, maple and ninebark saplings were planted at North Mountain Park to continue the restoration cycle of an area cleared of blackberry by a school group during the spring Service Learning season.

The groups were led by APRC Volunteer Coordinator, Sulaiman Shelton and AmeriCorps member, Mikaela Lea, who is serving North Mountain Park as the Service Learning Program Leader (North Mountain Park is managed by APRC). On the topic of teamwork, “It’s amazing to see a group of acquaintances bond and grow as a team so quickly. There really is something unifying about putting in hard work and making a positive contribution to your community,” says Lea.

Most of these students had not previously wielded a Pulaski or shoveled woodchips. Throughout the two sessions, crews learned about tool safety and the importance of restoration work. Crews were also interested in learning place-based knowledge together; finding out which native plants they were promoting and why. For example, beneath swathes of Himalayan blackberry and Gallium, they found and identified: wild trailing blackberry, currants, snowberries, ninebark, maples and other important native plants.

Throughout the two sessions, numerous park patrons showed their support and gratitude for what these young people have accomplished. Many avid park users noticed the improvements right away. While the hours they contributed are quantifiable, the help we received from them while having reduced staffing is invaluable.