City staff has been coordinating with local and regional providers of homeless services on the issue of Emergency Cold Weather Shelter solutions.  Due to the restrictions placed on congregate sheltering, the City has been looking for options to provide shelter during inclement weather events that will be safe for both shelter participants and volunteers while being able to maintain social distancing.

One option, which many communities throughout the state are utilizing, is the purchase and use of pallet shelters. These shelters are relatively inexpensive, and include heat and electricity.  They have the capacity to provide shelter for up to four individuals; though the City would not recommend more than two individuals in a shelter unless they are a family unit comprised of more than two individuals.  The City is proposing the purchase three of these shelters to help provide additional capacity for shorter term shelter that is COVID-19 safe.

The City is proposing that these shelters be placed in the parking lot of the Unitarian church, which currently is a part of the overnight parking program that has an established registration and agreement process and outdoor bathroom facilities.

Ashland grew by 145 people between the Certified Population of 2019 of 20,960 and the current 2020 Preliminary Estimate of 21.105.  That is the same numeric increase (145 people) that occurred between 2018 and 2019.  This population growth rate of 145 people annually is approximately 0.75% growth,  whereas the PSU Population projections for Ashland assume an annual growth rate of approximately 0.4% over the next 25 years, dropping to just .1% thereafter until 2068. 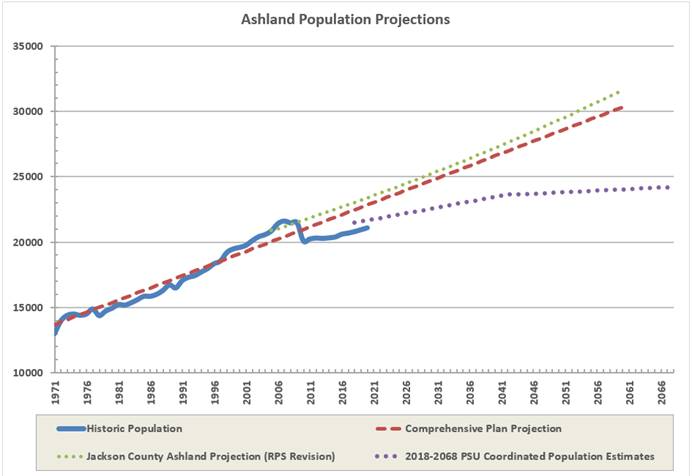 Rogue Valley Television Annual Report
Below are some highlights from the RVTV annual report. Refer to the full report for more information including graphics for online viewing traffic, social media and website tracking, and a fiscal summary can be found here.
2020 Water Supply

At the May 4, 2020 Study Session, Public Works presented the water outlook for 2020 along with the approved drought management strategy to Council. The drought management strategy entails using Talent Irrigation District (TID) water early in the season once spilling is stopped from Reeder Reservoir to slow the reservoir drawdown during the summer irrigation season and then when TID is no longer available and if water is still needed to supplement with Talent Ashland Phoenix Intertie (TAP) water.

Public Works started pumping TID on July 21 when the reservoir was at 94.60 percent full. They had to wait an extra week and a half to start pumping as to minimize the impact to the Independent Way construction project due to the additional water required in the ditch and associated overflow into Hamilton creek. The additional water would have created a logistics issues for the contractor building the new Hamilton Creek culvert at that time.

Public Works pumped TID water until September 3 when it was shut off due to water quality concerns. During the timeframe of July 21 to September 3, 51.15 million gallons (MG) of TID water was pumped and 227.43 MG was treated in total averaging about 5 million of gallons per day (MGD) in total production. The peak day occurred on September 9 and was 5.84 MGD. Outside of the fire response the normal peak day occurred on July 31 and was 5.49 MGD.

When TID is shutoff the reservoir was at 64 percent and Public Works anticipated starting up the TAP system on September 9 to pump for up to four weeks to supplement the Reeder supply and also work towards “proving” the Lost Creek storage right permit. Due to the horrific Almeda Fire, TAP access was not available and efforts were focused on assisting Talent/Phoenix in order to bring them back online for basic sanitary usage for both communities. After power was restored and all services were shutoff to facilities that were victim of the fire, the City worked with Talent and Phoenix again regarding the possibility of pumping TAP without burdening either community. During the timeframe without access to the TAP system the Reservoir was drawdown from 64 percent to 37.3 percent as Reeder storage was now supporting all domestic and irrigation use for the Community.

After adequate flushing, preparation of the TAP system and water quality testing the City started pumping TAP water on October 1 with the reservoir at 37.1 percent. The reservoir dropped to 36.10 percent over the next few days and slowly started to rebound as water usage diminished and there was some rainfall. Public Works pumped TAP water from October 1 until November 10. A total of 58.6 MG was pumped during that timeframe or an average of 1.43 MGD.

As of November 29, the reservoir is at 54.2 percent full and water usage is down to typical winter time demands. Public Works typically manages the reservoir level at 60 percent during the wintertime as approved by FERC as an interim risk reduction measure until such time as the left abutment erosivity concern is fully mitigated with our Dam Safety Improvement project currently in progress. Staff expects to bring pertinent information regarding the recommended mitigation alternative and final design contract forward in early 2021 for approval by the Council. 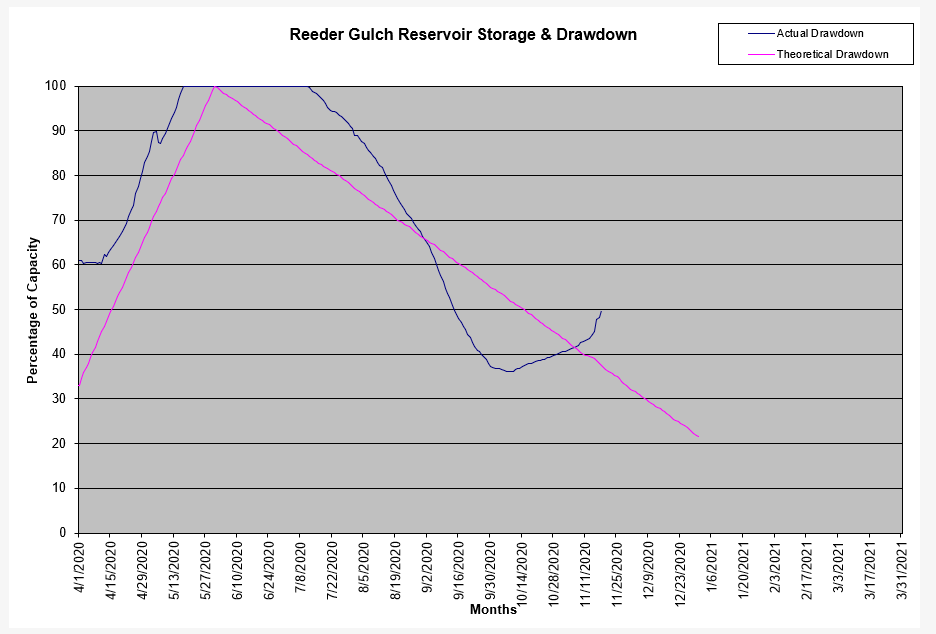