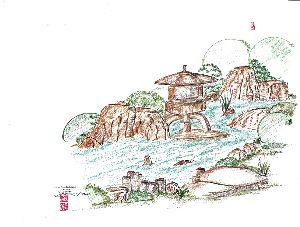 Garden plans in Lithia Park. The plan was approved in late January 2019 but failed to move forward due to community concern regarding the planned removal of two existing Douglas Firs trees at the proposed site.

Toru Tanaka has created an amended design that will incorporate the two Douglas Fir trees into the Japanese Garden. Toru is the founder and president of Portland Landscape Design and Japanese Garden Specialty. He was trained in Japan and has over 35 years of experiences. Toru also served as the director of Portland’s Japanese Garden from 1988 to 1991.

“The existing garden is a Japanese-style garden. The new design will be respectful of the history and culture of an authentic Japanese Garden. Toru has the qualifications to create an authentic garden,” stated Ashland Parks and Recreation Director, Michael A. Black, AICP.

The redesign is made possible by a $1.3 million grant through the Ashland Parks Foundation, earmarked to create an authentic Japanese Garden in the park. Jeff Mangin and the Marechal family of Normandy, France have donated the funds in memory of Jeff’s late wife, Beatrice Marechal. The project is in accordance with the Lithia Park Master Plan that is scheduled to be formally adopted by the end of this year.